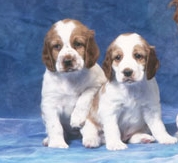 This article was first published in the WSSCA's National Newsletter, The Starter Barks, July, 1997. I've made some changes to the text to make it more relevant to a wider audience.

Well, if anyone ever thought raising puppies is "fun", this article may convince you otherwise. Spotty was born in March, 1997 as half of a "twosome" litter. He seemed OK at birth, and developed normally during his perinatal period. But, by the time he was one week old we noticed he didn't use his rear properly, and he seemed to hold his front legs abnormally far away from his body. The rear pads seemed underdeveloped and he was unable to push off with his hocks when he crawled.

'Well, maybe he'll improve in a week,' I hoped. By 10 days both pups had opened their eyes, and at 2 weeks old, his sister Dotty was teetering around the whelping box. Spotty was not doing any teetering, though, and he was the shape of a tick--flat and oval. 'Oh great,' I thought, 'not only can't he figure out how to crawl, now he's a swimmer puppy, too.' In fact, he was so flat and wide that when he tipped over on his back, he couldn't right himself. He lay there, looking like a beached turtle, screaming and waving his too-wide arms and pitifully underdeveloped legs.

Good grief, what was next for Spotty? By 3 weeks old, Dotty had discovered the finer points of manuevering around the whelping box, and was even trying to climb out to explore the room. Spotty's favorite activity was being a pillow for his sister, when he wasn't nursing or dragging himself around the box or chewing on her ear. We started to notice that his rear legs were very rubbery, lacked a definite division between the hock and thigh, and often were positioned at crazy angles while he slept or played.

At this point I took Spotty to the vet, concerned that the swimmer condition and lack of rear development would mean he should be euthanized. After all, if he would not develop normally, it would be cruel to allow him to suffer. An x-ray revealed both femur heads were out of their sockets, but there were no obvious spinal abnormalities. Gosh, it seemed the only luck Spotty had was bad luck. We submitted a radiology consult by mail to the UPenn Vet School, and would wait for their diagnosis before making any decision about his future.

While waiting for the consultation report, we spent each day agonizing about that cute little ball of red and white fur. Late at night before I went to bed, I'd pick him up and hold him, silent tears running down my face. I knew that Spotty may not be with us for very long, and we had wanted his short life to be good and happy and filled with all those funny things that puppies did while growing up. And we didn't want his sister to grow up alone, either. I wasn't really sure if the tears were for him, or me, or both of us.

I escaped Spotty's problems for a little while by traveling to the WSSCA Specialty. When I came home, he seemed about the same as before. We hadn't heard yet from UPenn about his x-rays, and we enjoyed this reprieve by playing silly puppy games and talking puppy talk to both little pups. During the following week, I kept thinking that Spotty was showing some signs of improvement--but I wasn't sure if it was because I WANTED to see it or if was really there. He seemed to sit on his rear haunches more, he tried to stand up and peer out over the whelping box, and it seemed like his ribcage was becoming more rounded. I even caught him trying to walk a few steps, but he was using his stifles instead of his hocks to move in the whelping box. 'Gee,' Rich said, 'maybe we should make him little knee pads so he could walk better.'

By the end of that week, it really looked like Spotty was trying to get his rear legs under him. I felt better about him than I had for the past 4 weeks. I kept hoping that even if he'd never be perfectly normal, at least he might walk and be house-broken. That meant we could place him in a home if we found the right one. That night, the tears were still running down my face, but when I kissed Spotty good-nite, I felt that he might have a chance for lots more tomorrows.

This past weekend, the pups turned 6 weeks old and Rich and I put them in an ex-pen in the yard for the first time. It was a beautiful spring day, and I felt that if this was all the life Spotty would ever know, it would be a good memory for us both. Then, I watched in amazement as Spotty picked himself up and started walking a few tentative steps, trying to figure out how to balance himself on a set of weakened, inexperienced rear legs. He did great, just great, until his sister came and knocked him over in her impatience to get him to play tag with her. 'Oh, God, 'I said to myself, 'please help him get up, let him walk, please let him walk...' And he did.

The more steps he took, the more I was convinced that he'd be OK--not perfect, but definitely functional. As I watched him gain confidence walking, it appeared that either his hocks or stifles would buckle if he didn't place his feet just so in the grass. His favorite gait seemed to be a bunny hop--he could even get across the yard doing that hippity-hop run. We found grass and shag rugs were the best for traction, and tile floors were the worst. I'm sure he's got some kind of congenital development disorder that causes the bones and ligaments to mature too slowly, but I don't know if it's a syndrome with a name. All I do know is that it may take Spotty a few weeks to figure out how to do it, but he'll WALK...YES, HE WILL WALK...

Spotty did learn to walk, and run, and gallop, and play with children. On his final health exam, the vet noted his femur heads seemed to be repositioned firmly in their sockets. He is now the loving companion of a wonderful family in New York State.

We have been unable to diagnose his condition, but I have been in touch with a breeder of another sporting breed with a similar experience. I'll continue to monitor the condition, and watch for its appearance in other litters.

Spotty is one of the puppies featured in the book "Welsh Springer Spaniel--A Complete and Reliable Handbook" by Linda Brennan. He and his sister "Dotty" were the two small pups in many of the photos. The photos were taken in May 1997 by animal photographer Isabel Francais at a photo shoot at our home.