It all started here in this picture. Really. This is the dog we decided to keep from our first litter in 1987. The litter was born at the end of March, and this picture was taken May 23 that year, when the puppies were old enough to be evaluated at 7 weeks. I guess you could consider him a gift. It was my wedding anniversary-12 years of marriage that week. So, that's how Kayo wound up staying with us in our home. One sister went to live in NYC, another to AZ, and a brother in central Jersey. 4 of the 5 puppies out of that litter finished their championships. We first showed at Palisades/Ramapo KC in October 1987 at Liberty State Park, across the water from the Statue of Liberty and the WTC. I showed Kayo for all but his final points, and then we had Joy Quallenberg train and show him to do some campaigning in the Northeast.His first SpGr placement came on a Sunday in December 1988, and I remember it vividly. I was down in GA with Sue and Gary Reise, breeding Kayo's dam Kismet to Ch Statesman's Maverick when the call came from Rich. Kayo hadn't done anything at the Saturday show, but on Sunday he got BoB under Charlie Rupppert and Janet Wilcox, the breed judge from Saturday, gave him a SpGr4! Ha! Even though she hadn't acknowledged him in the breed the day before, she'd managed to find him in the group the next day. Go figure...

And so it began. Kayo was shown through the winter of 1988 and into the spring of 1989. And then came the WSSCA National, at the Penn Treaty KC in Ludwigs Corner, PA in April,1989. The judge was Dorothy Macdonald - she'd given him 2 pts/BoW as a youngster the prior September in Somerset Hills KC. So, who knew what would happen, she'd only seen him as a gangly teenager. Kayo had as much chance as any other special in the ring to try to beat the reigning breed winner, Ch Fracas Little Caesar and Laddie Carswell. I was videotaping the ring that day, and I'll never forget watching it all unfold in the viewfinder of the camcorder. The judge pulls out Little C and Kayo, sends them around the ring, and then picks Kayo for BoB. KAYO?
K A Y O ! ! !  At 25 months old, with just one SpGr4 under his belt, with novice owners footing the bill, limited campaigning, no advertising, and there it was-Kayo had just won the 1989 WSSCA National Specialty. Then he went on to earn a SpGr2 under Ruth Tongren. Well well well. Guess we had made a decent decision after all when we kept that little puppy.

Although not originally invited to participate as a breed representative at the AKC WSS video session that was scheduled for the next day at St Huberts in Morristown, J D Jones extended an invitation to us after watching him the SpGr ring. So, he did get used for the video...I laugh everytime I watch it-you can find it on YouTube now. "This dog's ears are too large" is Kayo. "This dog's coat is correct" is Kayo. There's a few other glimpses of him, but the tracking view of the whole line of ALL the WSS stops just as it gets to us, I think. OK, so he's now won two SpGr placements and has a National Specialty win under his belt. Obviously, Rich and I weren't in a position to finance a show career for Kayo, but who doesn't like to win? So, we kept him out through the spring and early summer of 1989, where he and Joy earned another four Sporting Group placements-a Gr4, back to back Gr1s, and a Gr2. We asked Joy to try to find a sponsor for him to attempt to defray the show expenses, and she contacted David Ruml, an owner of big-winning dogs from the Terrier, Hound and Sporting groups active in the 1980s to 1990's. He was interested, but only if the dog was in his name, without our name included. Reluctantly we agreed, and entrusted him to Joy's care and Mr. Ruml's ownership in mid-July, 1989. Kayo lived with Joy and was as well cared for as any show dog can be. But we missed him, and I'd put his obedience career on hold during this time. 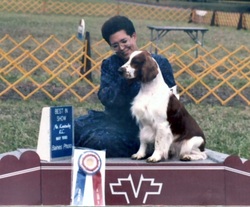 From the time we sold Kayo in July,1989 until the shows held in conjunction with the 1990 WSSCA National Specialty in Cincinnati, Kayo accumulated an additional 18 SpGr placements. At the show two days before the specialty, Kayo was amazing. He  took BoB and a SpGr1 under judge Mrs. Margretta Patterson-Kauffman, and then Forrest Dye, who had never before considered a WSS in his Best ring, awarded him BiS. The day was sweet-doubly so because Rich's folks came down from Bloomington, Indiana to visit us that day, and they got to witness the ultimate high for breeders...not that they understood what all the hoopla was about, but hey-winning the whole bowl of cherries is always a fun thing. Two days after winning his Best in Show, Kayo won his second WSSCA National Specialty under judge Marie Koonts. Her husband Niall gave Kayo a SpGr2 that day (he apparently didn't like Kayo as much as his wife did-she consistently gave him SpGr1 wins, and he gave Kayo SpGr2 and 3 awards).  Kayo and Joy continued their partnership for Mr Ruml through January, 1992. During that time he accumulated another 62 SpGr placements and another Best in Show award in July of 1991 under Marie Koonts (see, I told you she liked him!) and Dorothy Macdonald. Kayo had been out being campaigned by Mr. Ruml for two and a half years, and we knew his show career was going to end. Joy had promised me that she would convince Mr. Ruml to return Kayo to us and she was true to her word. Kayo returned home after the Florida circuit in 1992. Life wasn't without it's trials and tribulations with multiple intact males living in a non-kennel environment, but we managed to work it out. 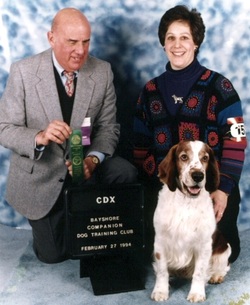 Immediately after Kayo returned home in January, we began brushing up on his obedience training, and I entered him in the March Raleigh NC show circuit because there were five obedience trials in a row. I wanted him to get his Companion Dog title quickly so we could start on the Open work. So, off we went to Raleigh NC just two months after returning home, and Kayo did beautifully. Nothing like being campaigned as a show dog to teach you how to handle crowded exhibition halls, noise, distractions and all the things that can trip up a less experienced dog. Kayo earned his title in the first three shows, and qualified in the last two, and even earned a placement at one show. He averaged a respectable 192. Pleased by his performance, we returned home and began his training for Open work. In February, 1993 we qualified for our first two legs in Open at Staten Island CDTC and Bayshore CDC shows with an average score of 195. We planned to finish up the title at the Louisville and Raleigh shows, but circumstances were stacked against us and those legs never happened...we went, but he didn't qualify for a variety of reasons, all related to traveling with a bitch in season. (Note to self-NEVER AGAIN!) We returned home, regrouped, and began Utility training while continuing to keep the skills up in Open. The following year we reentered the Bayshore and Raleigh shows in Open A. Kayo completed his Companion Dog Excellent title at the February 1994 Bayshore show, exactly one year from his last qualifying leg! He then placed in his 3 Open A classes on the Raleigh show circuit in March, 1994. He was now 7 years old, and it was evident that Utility was going to be a real challenge, so Kayo was retired from obedience training.

Between the time he returned home and the end of his show career, Kayo earned an additional three SpGr4 placements, bringing his career total to 89 SpGr placements, two WSSCA National Specialty wins and two Best In Show awards. Admittedly, there is nothing like beginners luck. But if I had to do it all over again, I don't know that I would. I loved Kayo, but living with a show dog is no easy feat-the same characteristics that draw your eye to the dog in the show ring are the most difficult ones to live with in a home situation, especially with other males around. Rich and I got the 'big winning show dog' bug out of our systems. We realized we didn't need to prove anything to anyone-we'd already done it, and done it well. That was enough for us.

David Ruml was never approved as a member of WSSCA, although he did apply. Consequently, Kayo's name is not found in conjunction with any WSSCA trophies or awards, nor was his name mentioned at the WSSCA banquet in 1990, despite winning both a Best in Show and National Specialty. The 'top dog of the year' award was given to our friends Carol and Mauice Krohn, for their lovely Ch Tydaky's Wildfire while we sat at their table at the 1990 banquet. We all knew Kayo was the top WSS of the year, and although we had owned him when he won his first WSSCA National Specialty and 6 SpGr placements, that wasn't enough. Due to the rules, only WSSCA members were eligible to be acknowledged, not the breeders of the dog. Oh well-cie la vie.  We are proud of what Kayo accomplished with Joy. He was campaigned heavily and was competing against two legendary dogs-Ch Salilyn's Condor with Mark Threlfall and Ch Luftnase Albelarm Bee's Knee's with Michael Zollo for a spot in the SpGr placements. That was HUGE competition, and he succeeded in making a place for Welshies in the Sporting Group to be recognized. Despite the fact that he was a top show dog and nationally ranked for a year, even if he was totally ignored by WSSCA, we were just happy to get him home and let him be a housepet again. Kayo died at the age of 14 when we discovered he had metastatic lung cancer, primary unknown. His life was a wonderful experience for us, but we don't dream of being 'top show dog breeders' anymore. We have been there and done that, and all we want to do now is train and show our own dogs and enjoy them. They may not be big winners, but they are the dogs we love.