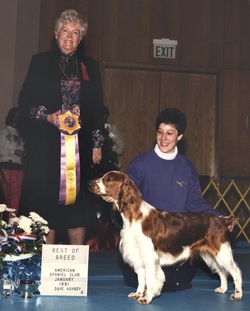 Motley was sired by Ch Statesman's Maverick, and we were pleased to do essentially an 'all Statesman's' breeding with his dam Ch Stateman's Charming Kismet UD. He was born in February, 1989 in Kismet's third and last litter. It was also her largest litter-10 pups were born, and 9 survived. That litter taught us a lot about the trials and tribulations of being a breeder. It was the first litter where we had such a large number of puppies, the first litter where we had to deal with the heartbreak of losing a puppy, and the first litter where we had to engage in supplemental feedings to make sure that all the pups survived. Motley was born the same year that the WSSCA approved and accepted the revised breed standard that is now in place. It was the first one to mention actual size in the standard, and there was a lot of talk about dogs like his brother Kayo being 'too big' in the breed, so we named him 'Made To Measure' to commemorate that minor hubbub...just an inside joke, really.

Motley was entirely owner handled for all his championship points, and I continued to show him in the breed ring, occasionally even in the same ring with his older brother Kayo. He was an entirely different style from Kayo, though. He was lighter boned, more square and shorter backed than Kayo, so there was no way judges would even recognize they were related. He wasn't well angulated front or rear, but he was very balanced and was extraordinarily light on his feet when he gaited. Motley's most exciting show win was the one pictured here, where he was given Best of Breed, owner handled, at the 1991 American Spaniel Club show at 23 months old. The originally slated judge started the judging assignment but became ill during the class judging. Judge Marilyn Anderson from California stepped in and completed the assignment, and somehow found Motley. I always say that the judges for our breed have to work harder because they are dealing with amateur-owner handlers like me, who don't present their dog as well as professional handlers. I remember a judge at ringside commenting to me after breed judging that Motley "moved around the ring like he had cotton balls on his feet." I figured Mrs Anderson had noted Motley's easy side gait and liked his style.

This show win was a thrill for me, and I'll never forget the Best in Show presentation that night. I was scared to death, and remember, I didn't really have a lot of  show experience. I found Candy Carswell next to me in the lineup, with a red English Cocker Spaniel, I think, and I was so happy for a familiar face. I remember telling her how worried I was about BiS judging, and she smiled and reassured me that I'd be fine. I stuck close to Candy and just did whatever she did-figured I couldn't go wrong that way. The ring at ASC in Secaucus was HUGE, and I remember that when we all gaited around the ring the first time, there was a wall of sound waves washing over me as the ringside folks clapped for all the exhibits. Amazing. Really. Amazing. When I was getting ready for my individual routine, I remember thinking "No one will clap for me, most of the WSS exhibitors are already gone home". Ha! Again, this wall of sound waves washed over me as we gaited down and back and people clapped. Let's face it, I had NO pretensions that Motley and I were going to pull out any sort of miracle in the BiS judging. But it was a FABULOUS experience so early in our breeding career to be able to show our own home-bred champion in that venue.

There's nothing that can top that 1991 ASC win in my memories of Motley. For the rest of his career, Rich trained Motley in obedience and earned a CD. Motley was diagnosed with moderate CHD at 2 years, and so was never used at stud. He had periods of pain, treated with small doses of prednisone, but it precluded pushing him to jump in Open obedience work, when the jump heights were still high. When Kayo returned home in 1992, Motley was probably the least happy dog in the household, having to relinquish his primary position to the larger and older dog. We were also inexperienced in dealing with multiple intact males in a non-kennel environment, so the learning curve was steep all the way around. We managed to develop a workable solution, and Motley was shown sparingly in breed through his veteran years until he officially retired to the couch to keep Rich company on those days when the Yankees and the Giants were broadcast on TV. I'll always be grateful to Motley for being an easy to show dog who managed to attract the judge's eye at one of the most important shows of the year. He taught me a lot about owner-handling and gave me a once-in-a-lifetime chance to be in a BiS ring...Good boy, Motley, good boy.