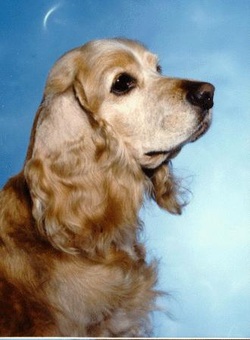 What do you say about the first cocker spaniel you owned, the one who taught you how to be a trainer, how to compete at AKC events, how to buy a minivan to store all his stuff? We did what most people do who decide they want a dog - we found him in a classified ad. He was bought out of a cardboard box with four other brothers and sisters squirming for attention. We didn't care about the health or temperament of the parents - we just wanted him, and we brought him home to our 4 room apartment in Maplewood, NJ in July, 1977. Then we learned that the black stuff all over him was flea dirt...duh. Cue flea spray and flea combing and flea shampoo starting  Day 1. We were fortunate to have friends from our temple mentor us in finding a vet and buying all the essential doggy stuff. But we never did get the hang of the crate with him-so he stayed loose in the apartment. The dog trained us-how not to cut his nails, how not to brush and comb him. He started screaming before we even cut the first nail or made the first stroke through his hair with a comb. Amazing. So amazing, in fact, that he was impossible to examine when we brought him to the vet. Obviously he'd have minimal handling and no grooming before we got him-no 'early neurological stimulation' was practiced on him, that's for sure. It took three people to hold him just to listen for a heartbeat at the vet's office! So, kindly old Dr. Pollack looked at us over his glasses and announced "You WILL bring this dog to dog obedience school!"

That pronouncement started it all. Really. We called the Town & Country Dog Training Club, enrolled Brandywyne XVII (since there were 16 prior AKC registered Brandywyne's apparently...) in Beginner classes, and we started practicing our weekly exercises dutifully at the end of the dead-end street in front of the house, much to the amusement of the neighbors across the street. They had no idea why we walked in circles and figure eights, ran fast and slow, walked and turned around, and practiced calling the dog and running backwards. Brandy had a curious habit that made him notorious at the dog club, and memorable. We always followed the recommendation to NOT feed him before we went to class. We always pottied him before arriving at the club training hall, and again when we got there. Didn't matter. He always managed to poop in the class. Every week. Without fail. We actually stopped feeding him 36 hours before class once, and it didn't matter. He still managed to poop in the class.I think we even sedated him once before class, since the vet figured he was upset and that's why he pooped. Didn't matter-he was sleepy but he still pooped. So we just started carrying plastic bags in our pockets to keep the class disruption to a minimum.

The T&C DTC had a rule-the dog couldn't go on to take the Novice class until it 'graduated' from Beginners. That meant the dog had to successfully complete the equivalent of a SubNovice routine, including waiting on the recall until he was actually called before he ran to us. And of course, he couldn't poop during the test...at all. So after 6 Beginner sessions of 8 weeks each, and with the entire club senior membership watching, we finally got Brandy to successfully complete all the exercises and not poop. We had started training in early 1978 and he finally was allowed into the Novice class in 1979. Of course, Adrienne Bancker knew this-she watched us train Brandy during those days. Brandy was a challenge-he was a food-hound but this was during the time when Bill Koehler reigned supreme, so there no food training being done, and we didn't know to try biscuits instead of collar corrections. Duh. That would come later with other dogs, but not Brandy.

When Adrienne offered us Robbie to train, Rich took over Brandy's training and I devoted myself to Robbie. Club members actually convinced us to try dog obedience matches with Brandy, starting with the T&C DTC match and trial. Remember, they were trying to encourage us to become members, so we were free labor to steward at shows, work hospitality, etc., but we also got a chance to put our own dogs through the paces. Rich and I guided Brandy to his 3 Novice legs. I got one, Rich got two. He wasn't pretty but he qualified. And hey, the score isn't on the Companion Dog certificate! 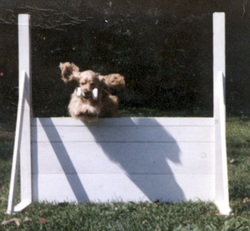 Rich and I continued training Brandy and Robbie through 1979 and 1980. Then Adrienne told us about a dog school up in Sussex County where they could assist us in getting Brandy more reliable on off leash work for his Novice and Open, and for me to train Robbie for Novice. So, we began schlepping to the hinterlands of Northwest New Jersey once or twice a week to take training from Ruth Rosbach and Diane Baumann at their Heel & Toe dog school. Again, this was before the 'kinder-gentler' dog training processes were fashionable. Brandy went into a prong collar and found religion-he actually decided that working a little harder and paying more attention was something he COULD do successfully. Rich worked through ear-pinching for a dumbbell retrieve, and again, Brandy succeeded in learning how to do it and even liking it. And remember, this was when dogs had to jump 1.5 times their height at the shoulder. For Brandy, that meant he had to jump 22 inches with a dumbbell in his mouth. As you can see, he did learn how to do it. In fact, Rich and Brandy completed their CDX title in 1983 with Diane and Ruth's help-it took years, but he did it. When we were looking for a house, we decided to move closer to Sussex County to be nearer to our dog trainers. Our first house was about 30 minutes from Heel & Toe, and we were traveling to Sussex County as much as three times a week in the 1980s. In fact, we became heavily involved with Diane and Ruth, taking classes, training in off hours with the students and eventually even teaching students as instructors. 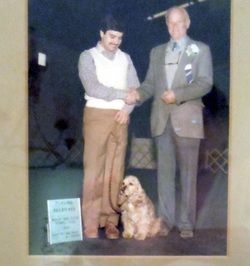 Rich's goal with Brandy wasn't just to earn a CDX title-he was determined to get the Utility Dog title. Brandy was trying to self-destruct, though. As training intensified, he injured himself on a jump and needed time off with steroids to heal his spinal disc. He developed hotspots. We became experts at catching them early, soothing him with steroid cream and cooling baths. Rich started entering Utility A classes at trials, and had earned two legs on that UD by March of 1984. In April of 1984 Rich almost incurred the wrath of his mother-in-law when he decided to enter obedience trials in Maryland during the weekend she was holding her Passover seder. My mom is all about the 'family getting together' for forced family fun. So Rich's plan to be gone both Saturday and Sunday and be an empty spot at the table wasn't viewed in a positive light. So, it was both fun and a relief to get Rich's call on Saturday after the first trial, announcing that he'd be at the seder, since Brandy had QUALIFIED in Utility A at the first show and was officially RETIRED now that he'd earned the third Utility leg. Needless to say, my mom was also quite happy that Rich made it to the seder table on Sunday-she never did get this "obedience on the weekend" thing we did.

Let's remember we started this journey in 1978. Brandy had no ancestors with any obedience titles, was not bred for any particular training potential, and was being trained and handled by first-time dog owners and novice obedience enthusiasts. I mention that because new owners should be encouraged to train their dogs, regardless of whether they have any experience or the dog has any propensity for the training.  It just goes to show you-novice handlers with difficult dogs CAN DO IT. We promised Brandy he wouldn't need to do any more training or showing as soon as he qualified in Utility for the third leg, and we kept our word. His hotspots disappeared and never returned, so they were clearly stress-related. Brandy spent the remainder of his life with us being a companion dog. He moved with us to Sparta in 1987, and a few months after the move he displayed some mild confusion, getting lost in the front yard, not responding to calls to come inside. By the fall, he started having grand mal seizures, and we started him on phenobarbital. His seizures were poorly controlled, and we felt he had probably developed a brain tumor, since he was over 10 years old and had never had any epilepsy symptoms previously. We managed his condition as best as we could until one bad night in October, 1988 he went into status epilepticus requiring huge doses of Valium to break, with constant recurrences. Rich was at the emergency vet all night with him and in the morning he brought him back to our vet where he said goodbye to his friend, companion and longtime training partner.

Brandy was the hub of all our obedience activities and we still value the many friends we made during our time training, competing, organizing, running and judging at matches, teaching and just hanging out with other like-minded people. While Brandy was here too short a time, he made a huge difference in our lives, and for that we're forever grateful.  He was the start of all that Rysan was destined to become.