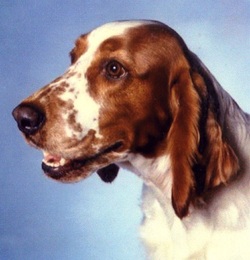 Ch Statesman's Charming Kismet UD
These are notes from some e-mails I sent out early in 1997 to my Welsh Springer friends on the Hoflin List. The full article was published in the July, 1997 WSSCA Newsletter The Starter Barks.

I just thought I'd let other owners of aging Welshies about a little known disorder that can cause you a real scare...Kismet, who'll be 15 years old (bless her!) in just 2 months, is in the process of recovering from Canine Geriatric Vestibular Disorder (CGVD)--she came down with it on Tuesday afternoon.

It only affects dogs older than 8 years, and it can totally disable them for 3 days or so. No treatment except supportive care seems to work, and your vet, if she or he even recognizes the disorder, will refuse to euthanize the dog until the 72 hour time frame is up. Symptoms include nausea, vomiting, head tilt to the affected side, ataxia (difficulty walking), nystagmus (eyeballs seem to constantly move back and forth in the eye sockets), disorientation, and difficulty eating and drinking. Swallowing is OK, and if fed with a syringe for a few days to maintain nutrition and hydration, the dog will probably be able to be hand fed canned food after 3 days. That's where we are now.

Kismet can't drink or eat on her own yet because it's still hard for her to look down and not get dizzy, but she will allow me to give her water via large-bore syringe and pureed dog food (yummy?!) that I've enriched with oil and Esbilac. She took some hand-fed chopped dog food from me this morning, and we're just entering her 72 hour stretch. It can take 7-10 days to get back to normal. In Kismet's case she was functional but feeble prior to the disorder...still able to climb a full flight of 11 stairs multiple times during the day, objecting loudly if you made her stay downstairs while you went upstairs!

Now, she can climb up on her favorite couch herself, still has a slight ataxia and head tilt, and her eyes have stopped spinning...We're heartened, especially since we said our tearful goodbyes early Wednesday morning before we called the vet to request euthanasia. When the vet came up with the diagnosis and refused our request, we knew we were committed to giving her every chance to recover. It looks like she'll need about 2 weeks to get back to her old self.

The vet did try a large steroid dose "empirically", but this is not really indicated for treatment of CGVD. In Kismet's case they were needed only because she's afflicted with serious osteoarthritis of all her joints and her spine, and she objects to being picked up because it hurts. Since we had to carry her outside to potty and to put her on the couch, the steroids made handling her much easier. We'll taper them down and keep her on a low level for comfort reasons for whatever remaining time she has with us.

So, if this does happen to you, you'll at least know that the prognosis for some degree of recovery does look good. We're not into heroics with our dogs, but we do feel that Kismet deserves the chance to improve over the next few weeks. I'll keep you posted on how she does!

Just wanted to let you all know that after a week of gradual improvement, and one day of "backsliding" to being fed pureed canned dog food, Kismet decided she really was up to eating the chopped canned food out of the bowl and from my hands. She's improved dramatically in eating and drinking and ambulating by herself. The CGVD is resolving, just like a textbook case. It's been 8 days since she first got sick, and the literature says 7-10 days for improvement. She's better hydrated and less skeletal-looking, but still too thin to suit me. I'm going to continue the low dose prednisone, anabolic steroids and antibiotics for the next week or so, and see how she does. It's nice to have her "back" again, even though we realize that sooner or later we'll say our final goodbyes to this grand old lady.We just didn't want to euthanize her as long as she was still able to eat meals, accept pets and take biscuits from our hands.

More later, I'm pooped--oops, and Kismet's wandering towards the toilet bowl for a drink again!